From activity to quiescence, and back, across cosmic times 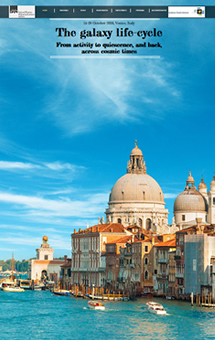 Scientific rationale
We live in a fairly stable and peaceful epoch for the Universe, with our Galaxy evolving gently and steadily, forming stars at the relatively modest rate of  ~3 solar masses per year. However, we know that 10 billion years ago the Universe was a significantly more active place, with stars being formed at a 10 times higher rate than it is seen around us today. The mechanisms driving this shutdown of the star formation (SF) activity in galaxies, the so called 'quenching', remain one of the least understood puzzles in galaxy formation to date. It is well established that the efficiency of a galaxy in forming stars is based on a delicate balance between cold gas inflow and outflow. Several quenching mechanisms have been proposed, which act to either prevent the accretion of new cold material onto the galaxy or remove the gas reservoir from it. In the former case, simulations suggest that the transition from a cold accretion mode in low mass dark matter halos to the hot accretion typical of the most massive halos, naturally leads to the formation of gas-rich star forming galaxies in the field and gas-poor red and dead elliptical in the groups and clusters. In the latter case, instead, powerful outflows, mainly due to the central Black Hole (BH), are advocated as efficient mechanism to expel the gas from the galaxy and stop the star formation. Alternatively, ``morphological quenching'' (MQ) also proposes that the formation of a dominating bulge would lead to the stabilization of the gas against star formation in galactic disks. Which quenching process or which combination of processes is driving the observed shutdown, is still an open question.
The aim of the conference is to challenge the current theoretical framework with the results of the most recent observations and to let theoreticians and observers discuss extensively in order to understand which process is the dominant mechanism for shutting down the SF activity in galaxies or if, instead, a more complex combination of different quenching processes, perhaps efficient at different stellar or halo mass scales, is needed.

Key scientific questions addressed by the conference
The conference aim is to address the following questions from the observational point of view:

The conference aim is to address the following questions from the theoretical point of view:

What is the role of cold/hot accretion in sustaining/suppressing the SF activity during the structure formation process?
What is the physics of the galaxy outflow and its effect on the galaxy gas content?
How are disk instability and compactness driving the morphological evolution of galaxies and their level of star formation activity across cosmic time?

Registration
The registration will be considered completed only after the payment of the conference fee. The deadline for the fee payment is July 31 2016. The registration fee is of 300 Euros and it will pay lunches and coffee breaks served at Franchetti Palace. The conference dinner will cost additional 70 euros. If you did not pre-register via the abstract submission form, please contact us before registering. For logistic reasons we have a limited number of participants.