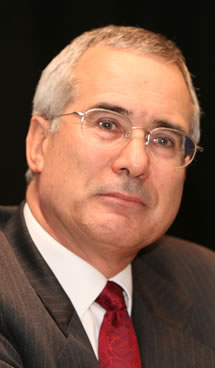 Nicholas Stern
Professor of Economics and Government, Chair of the Grantham Research
Institute on Climate Change and the Environment at London School of
Economics, London

Lord Stern is IG Patel Professor of Economics and Government at London School of Economics (since 2007), Head of the India Observatory and Chair of the Grantham Research Institute on Climate Change and the Environment.  He was President of the Royal Economics Society (2018-2019).  He was President of the British Academy (July 2013-2017) and was elected Fellow of the Royal Society (June 2014).  He has held previous posts at universities in the UK and abroad, including Oxford and Warwick universities; the Massachusetts Institute of Technology; the Ecole Polytechnique; and the Collège de France, in Paris.  He was Chief Economist at both the World Bank (2000-2003) and the European Bank for Reconstruction and Development (1994-1999).

Lord Stern was Head of the UK Government Economic Service (2003-2007), Second Permanent Secretary to Her Majesty's Treasury (2003-2005), and Director of Policy and Research for the Prime Minister's Commission for Africa (2004-2005).  He also produced the landmark Stern Review on the economics of climate change (2005-2007).   Research and publications have focused on the economics of climate change, economic development and growth, economic theory, tax reform, public policy and the role of the state and economies in transition.  He has published more than 15 books and 100 articles. His first books were on tea in Kenya and the Green Revolution, in India (where he lived for 8 months in a village in Northern India in 1974/75).  He is still studying the same village and its economic and social changes.  He has published more than 15 books and 100 articles.  His most recent books are "Growth and Empowerment: Making Development Happen" (MIT Press, 2005), A Blueprint for a Safer Planet" (Random House, 2009), "Why Are We Waiting? The Logic, Urgency and Promise of Tackling Climate Change" (MIT Press, 2015), "How Lives Change. Palanpur, India and Development Economics" (with Himanshu, JNU, and Peter Lanjouw, Free University of Amsterdam) published by Oxford University Press in 2018, and "Standing Up for a Sustainable World: Voices of Change" (Edward Elgar, 2020).

Lord Stern was elected Fellow of the British Academy (July 1993) and Foreign Honorary Member of the American Academy of Arts and Sciences (1998).  He has a BA Cambridge (Mathematics), D.Phil Oxford (Economics), and Honorary Doctorates from Universities of Warwick, Cambridge, Nottingham, Exeter, Sussex, Roehampton, Sheffield, York, East Anglia, Brighton, Paris Dauphine Technische Universität Berlin, and City University of New York; he holds Honorary Fellowships at St Catherine's College, Oxford; The Queen's College, Oxford; and Peterhouse, Cambridge.   Prizes awarded include the Royal Geographical Society Patron's Medal (June 2009); the Asahi Glass Foundation Blue Planet Prize (2009); the BBVA Foundation Frontiers of Knowledge Award (2011); the Leontief Prize for Advancing the Frontiers of Economic Thought (2011); the Aguila Azteca, Mexico's highest honor for a foreigner (2012); and the Stanford Institute for Economic Policy Research (SIEPR) Prize for Contributions to Economic Policy, (2020).   Lord Stern served as a member on the High Level Advisory Group on Climate Finance established by the UN Secretary General (2010) and as Co-Chair for the Global Commission on the Economy and Climate Change (Calderón Commission). Since 2016, he has Co-Chaired the Stern-Stiglitz Commission on Carbon Pricing. In 2017, he was selected as a member of the G20 Eminent Persons Group on Financial Systems.  He is a member of the High-Level Advisory Group for COP26 of the UNFCCC.   He was knighted for services to economics in 2004; made a cross-bench life peer as Baron Stern of Brentford in 2007; and appointed Companion of Honour for services to economics, international relations and tackling climate change in 2017.