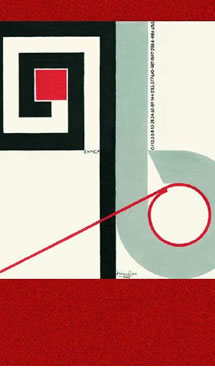 The aim of the Symposium is to encourage an in-depth discussion of problems of fundamental importance that are common to the two cultures, but that are traditionally seen from different perspectives. The forum will bring together scientists, philosophers, humanists, musicians with the aim of fostering comprehension of problems that have traditionally troubled humankind, and establish more fertile grounds for the communication between the two cultures.
An outline of the themes of the Symposium: the concept of time, infinity, the concept and meaning of nothingness, numbers, intelligence and the human mind, basic mechanisms in the production of thought and of artistic creation, the relationship between artistic and scientific creativity.
The symposium is promoted by the Istituto Veneto, in association with Istituto Svizzero di Roma

Friday october 26th
Intelligence and emotions
chairperson Giovanni BERLUCCHI
9.00 Giorgio VALLORTIGARA
Intelligence and human cognition: mental processing in humble brains
Studies on the ontogenetic origins of human knowledge provide evidence for a small set of separable systems of core knowledge dealing with the representation of objects, number and space. I investigate core knowledge systems in a comparative perspective, making use of animal models. I discuss evidence showing precocious abilities in non-human species to represent (i) the complete shapes of objects that move partly or fully out of view, (ii) the cardinal and ordinal/sequential aspects of numerical cognition and (iii) the geometrical relationships among extended surfaces in the surrounding layout. Some of the abilities associated with core knowledge systems of objects, number and space are observed in animals in the absence (or with very reduced) experience, supporting a nativistic foundation of cognitive mechanisms.
9.40 Elkhonon GOLDBERG
Many faces of intelligence
Insight, foresight, empathy, curiosity, expertise are the aspects of the mind which until recently were deemed intractable to rigorous science. Today we are beginning to understand their neural mechanisms, their changes throughout the life span, and their pathology.
10.20 discussion
10.50 coffee break
brain and music
chairperson Alberto Antonio SEMI
11.20 Joerg RASCHE
Cycles of re-creation: psychoanalytical approach to music
Musical compositions often tell a story - not by words but by shaping sounds and structuring rhythms, melody and harmony. Music can't be translated as its meaning can not be described thoroughly using language. Language is always talking through secondary semantics. Music is what it is - and by that it tells stories about a primary reality, the reality of relations. One example is the interaction of the very early affect attunement between mother and child. It is about the integration of affects/emotions with sounds and meaningful gestures, as a basic process for the so called mentalisation of perceptions. The classical music became a cultural vessel for this basic psychological process by developing a wide spectrum of musical forms, as rhythms, consonance and dissonance, combining different structural patterns, polyphonic interactions and so on. An example will be music by J. S. Bach (Prelude and Fugue e flat minor, Well Temperate Piano I, 8). Listening or performing this music provokes an unconscious remembering and re-creation of the very early patterns of interaction and integrating of emotions and experiences in our psyche. An important step in our psychological development is the hatching out of the mother-infant common orbit. The psychological cycle of early loss, alienation, paranoid confusion, mourning, grief and finally re-creation of inner objects can be demonstrated specially in music of the Romantic era. The piano cycle  Kreisleriana" op.16 by Robert Schumann is an example of the basic archetypal pattern of the creation of an individuated psyche.  If you want to see - listen! " (Bernard of Clairvaux).
12.00 discussion
Transfer to ISR, Spazio Culturale Svizzero di Venezia,
Campo Sant'Agnese
creativity in arts and science
chairperson Manlio PASTORE STOCCHI
14.30 Arthur MILLER
Art and science: two cultures or two sides of same coin?
It can be argued that art and science are two sides of the same coin - two aspects of creativity. It is striking that art and science became increasingly abstract in the twentieth century, almost in parallel. Why? How? In my lecture I shall look into all of this and what it tells us about artistic and scientific creativity.
15.10 Ernesto CARAFOLI
Scientific and artistic creativity. Towards a unifying concept
The scientific and artistic cultures are generally considered to be inherently different. The first is objective and demands verification, the second is subjective and does not require it. However, the structure of the process of creativity may be common to the two cultures, as it proceeds in similar ways from the initial step - the intuition - through the labour that leads to the final product. It is often stated that the aim of the scientific culture is the search for truth, whereas that of the artistic culture is the creation of beauty. This dicotomy is an unwarranted simplification of the matter, as truth and beauty are indeed the combined aim of both cultures.
15.50 discussion
16.20 coffee break
beauty: beyond emotions?
chairperson Arthur MILLER
16.50 Maurizio FERRARIS
Things and artworks
The unity of the kind "work of art" is given by three main characters: 1. the work of art is a physical object. 2. the work of art is a social object. 3. the work of art is a thing which pretends to be a person.
17.30 Giuseppe O. LONGO
The dynamics of beauty
A naturalistic definition of beauty is proposed based on our immersion in a vast ongoing systemic process: beauty exhibits itself and is recognized by us through the reciprocal dynamical adaptation between the whole system and its parts. This system evolves with time and so does that adaptation, hence beauty has a historical character and depends on the specific cultural and geographical contexts. The recognition of beauty is subjective, but the common nature and shared experience of humans make it intersubjective. This justifies an attempt to evaluate beauty in a tendentially objective way that goes beyond the particular codes of expression and interpretation to reach the fundamental level of mathematics and physics.
18.10 discussion
arts and science: a final journey
chairperson Charles KLEIBER
18.40 Mario BOTTA
Architecture between art and science
The talk will underline some of the aspects of architecture defined here as a language between art and science. The speaker will move from his personal designing experiences to attempt penetrating into the process of architectural creation: on one hand by describing the poetical intuition, on the other by explaining the critical rationale behind the designing choices.
19.20 discussion
19.45 Giuseppe O. LONGO
Closing remarks
20.00 Concert (E. Colombo, E. Fioravanti, S. Meyer, M. Siniscalchi)